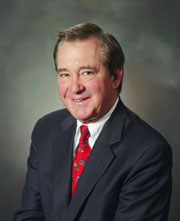 Over the past 42 plus years, The Stabile Companies have built over 4,000 homes and millions of square feet of commercial and industrial property throughout New England.

John P. Stabile, II has been active politically both on the state and national levels.

He formerly served on the Board of Directors for Fidelity Health Alliance, Catholic Medical Center, New Hampshire Chapter of the American Red Cross, Southern New Hampshire Chamber of Commerce and Industry, New Hampshire Golf Association and Member of the Finance Committee for the Bishop’s Relief Fund. Mr. Stabile was Chair of the Daniel Webster Council Distinguished Citizens Award Dinner and the recipient of that award in both 1991 and 2015. He served 10 years as a member of the Board of Trustees of Hesser College. Mr. Stabile is the former owner of the Nashua Pride, a minor league baseball team located in Nashua, New Hampshire.

He is a former member of the Woodland Cemetery Commission. He served as a Trustee at Bridgeton Academy and at his alma mater, Norwich University, for over ten years. He also served on the Board of Trustees of Rivier College. He was a member of the Nashua Police Commission for 5 years. Mr. Stabile is an Incorporator of Optima Health, New Hampshire Charitable Foundation, Member of Corporation of the Southern New Hampshire Regional Medical Center. Mr. Stabile is a member of the New Hampshire Board of Realtors and served on the Board of Directors of the National Association of Homebuilders.

Mr. Stabile was the recipient of the Nashua Chamber of Commerce Citizen of the Year Award in 2015.

On the personal side, John Stabile resides in Nashua with his wife Ginny and has two children, John III (Jake) and Ryan.

Since 1973, The Stabile Companies has been a leader in new construction throughout New Hampshire and northern Massachusetts. Our portfolio includes:

We are looking for land throughout southern New Hampshire, New Hampshire's Seacoast Region and in Massachusetts (north and west of Rt. 495)

We will consider raw land (handling the permitting / approval process in-house) or consider land with approvals / permits in hand.

The Stabile Companies offers a challenging and exciting work environment. We provide competitive salaries and excellent benefits. We are an equal opportunity employer.
With ongoing new projects and business development, The Stabile Companies offers a diverse range of job opportunities for the right people.
If you or someone you know is interested in joining our team, apply in person at: